Getting a Florida Concealed Carry Permit!

Recently I posted an article on my website about the process for getting a Florida Concealed Carry Permit.  I would like to expand upon that discussion and talk about understanding Florida concealed carry laws.

When you are full time RV living it is especially important to know what the laws are regarding carrying a concealed weapon and what can happen if you feel you are in a situation where you need to act!

Given that Pam and I travel to many different locations around the country it is even more important to know the laws and how they can differ from our domicile state of Florida!

Laws Regarding Select Places in Florida 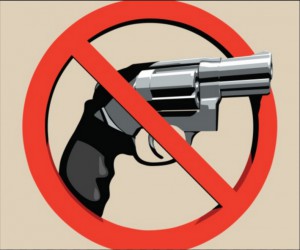 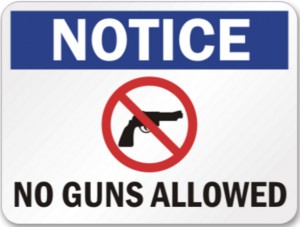 Is it trespassing if you see these signs?  Florida law is at best silent with regards to whether these types of signs give a CWFL holder legal notice that their entry would be trespassing.  At this time there does not exist a reported court case on this issue.  But, if you have an actual notice that the property owner has advised you not to enter or to leave their private property because you are carrying a gun, and you fail to leave, you are committing an act of criminal trespass.

Parking Lots: business owners can’t prohibit you from lawfully keeping a firearm locked in your vehicle in a business’ parking lot.  Schools, prisons, nuclear plants, companies engaged in national security, companies licensed to make, use, or store explosives, or places where firearms are prohibited by federal law are not included in this parking lot provision.

Bars and Restaurants: it is a crime to carry a weapon into any portion of an establishment licensed to serve alcoholic beverages for consumption on the premises.  You may not legally carry your concealed firearm into bars, taverns, and the bar area of a restaurant.

Airports: you may not carry your firearm in any portion of an airport terminal under Florida law.  This includes both the secured and unsecured areas of the terminal.

What Kind of Trouble Can You Get Into?

Florida concealed carry laws state there are misdemeanor crimes and felonies.  How can the improper use of a concealed weapon get you in trouble?

What is the punishment for these Crimes?

Florida law provides an additional aspect to the sentencing of individuals who possessed or used a firearm during the commission of a felony crime. Florida Statute #775.087 outlines felony elevation as well as minimum sentence durations.

When it comes to your use of a weapon, your conduct will be measured by the Reasonable Person Standard.

If you use deadly force with the reasonable belief that deadly force is necessary to prevent imminent death or great bodily harm, then you may have legal justification for your actions!

However, juries, judges, and prosecutors are human beings, and people can have vastly different ideas of how a reasonable person should act under any given circumstances.  This is particularly true if asked to decide whether or not deadly force was necessary to prevent imminent death or great bodily harm.

When is it Not a Crime?

If it comes time for you to use deadly force, you must have justification for the act.  Legal justification is a set of circumstances that the law says is a valid excuse for a person doing something that would otherwise be a crime. As a general rule, it is illegal to shoot someone, however, if the shooting is done under a particular set of circumstances like self-defense or in defense of others, the law states a person is excused from or is legally justified.

What is Deadly Force?

Florida law defines “deadly force” as a force that is likely to cause death or great bodily harm.  Discharging a firearm is considered a use of deadly force.

Florida’s laws regarding when the use of deadly force is legally justified is based on a perpetrator’s commission of what is called a “Forcible Felony.”  A Florida Statute lists these crimes as: murder, manslaughter, sexual battery, aggravated assault, carjacking, home invasion robbery, robbery, burglary arson, kidnapping, aggravated battery, aggravated stalking, aircraft piracy, treason, unlawful throwing, placing, or discharging of a destructive device or bomb, or any other felony which involves the use or threat of physical force or violence against an individual.

I will continue this discussion in part two of this post.  I will look at when it is legal for you to use deadly force and more on what will happen when you do!

Please check back to catch “the rest of the story!” 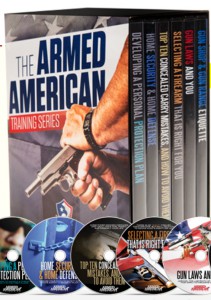 Thanks to the folks over at US Law Shield for their assistance in compiling the information that I have shared with you!