King Controls Jack Antenna – Is It Worth It To Put It on Your RV? 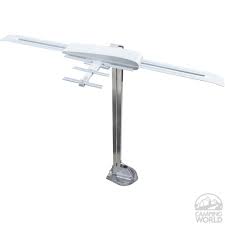 If you are using the old Winegard batwing TV antenna, you may want to switch over to the King Controls Jack Antenna!  We have a 2006 Newmar 5th wheel that came with the conventional antenna that was designed for receiving VHF TV signals.  When things switched over to HDTV a few years ago, we not only had to upgrade our televisions but figure out what to do with the antenna.

Winegard came up with the GS-WING Wingman Sensar TV antenna upgrade to help RV owners upgrade their existing equipment to be able to receive free digital TV signals.  We added this upgrade to our antenna back in 2011. It definitely helped and served us up until recently.

We are currently in an area where there are no major metro areas.  We are at least 110 miles from a larger city that broadcasts all the major networks.  So, using our Winegard setup, we could not receive even the local broadcasts 30 miles away.  The TV signal would come in sometimes and not be available others.  I had to rotate the antenna for each of the six channels I could get.  What a pain!

I have noticed that the newer RV’s have a completely different antenna setup.  I have seen some with round antenna heads and others with a more squarish setup.  They still seem to be atop the existing crank up antenna arm.  So, thanks to an internet search I discovered the King Controls Jack Antenna. 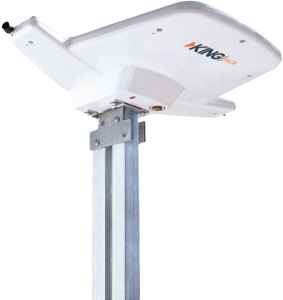 I did some research on the comments made by those who have purchased the King Controls Jack antenna upgrade.  The comments seemed mostly favorable.  Some folks seemed to feel they had to move the antenna head around a lot less in order to pick up TV stations.  A few said they noticed no difference in the number of stations they picked up.

With the Discover credit card points that I was able to use, I thought what heck, let’s give it a try.  That was after an evening where I was watching late night TV and could not watch the show I really wanted to see.  So, the next day I ordered it.

I ordered the King Controls Jack antenna from Amazon as they had the best price at the time.  Camping World was carrying it but it seems they have discontinued this particular item.  Maybe they were just out of stock.

According to the King Controls website, this new antenna head is supposed to make it easier to find a signal and then scan for available channels.  It is also less directional than traditional RV antennas.  It is also able to get better reception of UHF signals where over 80% of new HDTV channels are broadcast.  But it can also still provide great reception of remaining VHF channels.

One thing that really attracted me to this design was it is up to 70% smaller than traditional RV antennas and offers less wind resistance.  I have had to bend my old batwing antenna back into shape several times as heavy winds caught it and bent the fins upward.

The King Controls Jack antenna head replacement arrived from Amazon in its usual speedy fashion.  I was excited to get this installed because I am a TV addict and I was hopeful that this was going to solve my problem.  I don’t need a lot of TV stations to watch, I just need something!  There is nothing worse in an RV than having your TV signal come and go while trying to watch a sporting event!  FYI – some RV parks still don’t offer free cable, but that’s another can of worms.

So, the unit is supposed to be able to be installed in just minutes, and without any special tools, on your RV.  The included RV bracket allows the antenna to be mounted in either direction to clear A/C’s, vents or other potential roof obstructions.  As I started to install the new unit the weather turned ugly!  Fortunately, it only took me 10 minutes to remove the old head and install the King Controls Jack antenna.

I reprogrammed my TV’s and was able to pick up all the stations I had, and a few more.  The picture was more reliable and I did not have to keep moving the antenna head around to receive different channels.  It also has worked better in the rain: no effect on the picture quality.  I have not moved the RV since I installed the unit, but I suspect there will be less wind resistance on the road, and from crosswinds.

Hey, and the best part is no more late night TV problems.

I hope you found this information useful as you search for ways to improve your RV’s HDTV viewing experience.

Please feel free to leave a comment before you go!